The Risen Christ and the Anti-Disciple

Series: Eastertide 2021 - The Risen Christ and the Disciples

Notes from the Preacher

I used the illustration at the beginning of the sermon of Edwin Hubble and Milton Humason using the 100" Hooker Telescope at the Mount Wilson Observatory to explore the Andromeda Nebula, now known as the Andromeda Galaxy. Their discoveries transformed our understanding of the size and nature of the universe. Here are some pictures that I should have included in the service.

To see a picture of what the Andromeda Galaxy looks like on the night sky, check this link at EarthSky.

Here is a picture of me in front of the 100" Hooker Telescope while on my sabbatical in 2018. 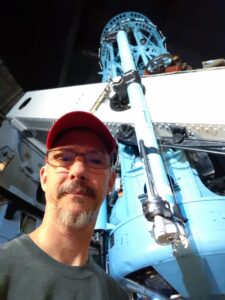 Pastor David standing next to the 100" Hooker Telescope at Mount Wilson Observatory. It's big!

The Andromeda Galaxy (Messier object 31 or M31) was originally thought to be a cloud of gas within our own galaxy, the Milky Way, until Hubble and Humason were able to resolve individual stars within its structure using the 100" telescope. They were also able to determine its distance at over 2 million lightyears, which exceeded other known object distances by one or two orders of magnitude. Thus they realized that it must be a galaxy unto itself! 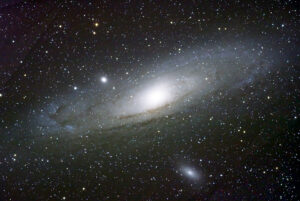 By Boris Štromar. The Andromeda Galaxy, also known as M31 or Messier 31. Permission to reuse by Boris Štromar, CC BY 3.0, https://commons.wikimedia.org/w/index.php?curid=2189395. The picture has not been changed from its original form.

Because of this bit of science, the universe expanded by trillions of cubic lightyears -- in our understanding, not that it actually changed. Our cosmological dogma had to change to meet the reality of the cosmos they were supposed to describe. In the same way, Saul's theological dogma about crucifixion and resurrection had to be completely overhauled when he had a vision of the Risen Jesus Christ to meet the reality of the reign of God that it was designed to protect.